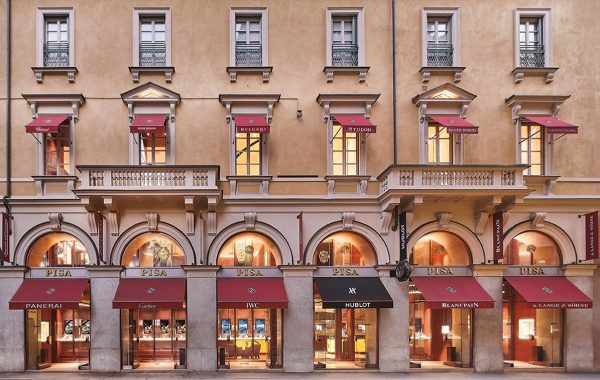 Milan Design Week 2017 was a special occasion, because it showed what synergy can be achieved when leading companies in their respective luxury industries – in this case horology and yachting – come together in time and place. Pisa Orologeria staged an exhibition which paid tribute to the interiors of the enthralling world of yachting: they recreated the magnificent rooms of Savannah, the multi-award-winning 83.50m mega yacht built by Feadship and with interiors and exteriors by Christina Gherardi Design.

No one could have predicted this exciting event – but nevertheless, it included some inevitable elements:

Savannah was the inevitable choice of yacht.  We need look no further than what Boat International had to say about this ground-breaker: “Savannah is the superyacht industry’s Ben-Hur: an awards magnet that cannot stop picking up silverware. The 83.5 metre Feadship trails the 1959 epic’s eleven Oscars, but she isn’t a million miles behind.”  As further proof of inevitability, in 2016 Savannah won the “Motoryacht of the year” category at the World Superyacht Awards, plus Best Interior, Best Exterior and Holistic Award at the ShowBoats Design Awards. On top of this, Savannah was the first ever hybrid motoryacht, and her interior enjoyed a breakthrough with another first; an underwater lounge.

Salone del Mobile was the inevitable choice of venue.  This world class event, the largest of its kind, has gone from strength to strength since its inception in 1961, then as now in Milan, and is arguably the number one show for furniture and interior design.