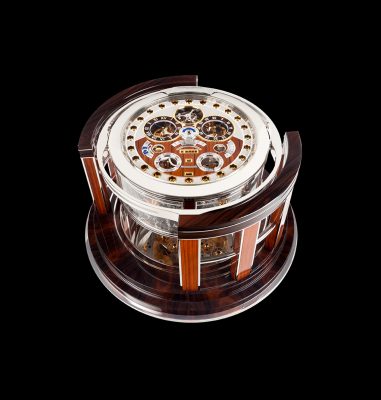 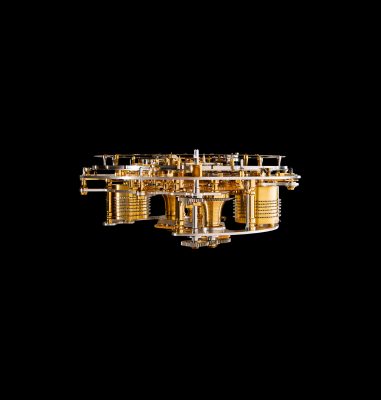 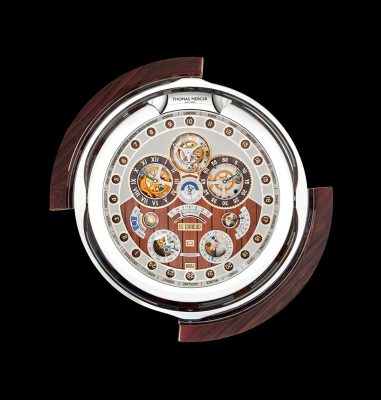 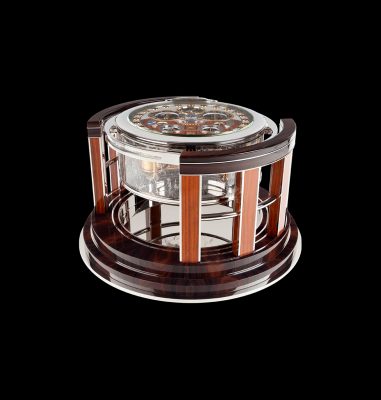 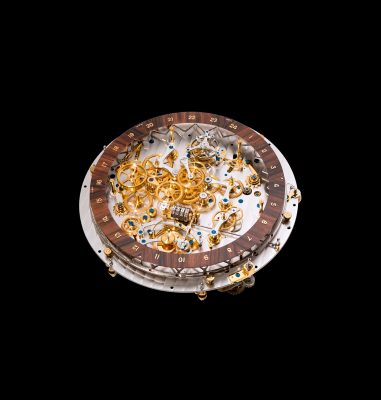 A true heir to Thomas Mercer’s legacy, the Observatory is a one-of-a-kind complicated marine chronometer. This exceptional timepiece features fifteen complications, including a rare flying Detent Tourbillon and double fusee-and-chain transmission, in a superbly handcrafted wood and steel case. The name Observatory pays tribute to the eponymous model of the 1980s, arguably the most luxurious marine chronometer ever manufactured by Thomas Mercer in its glorious past. Today’s Observatory, although it features many more complications, is a descendant of that timepiece in so far as it is a pinnacle of the brand’s know-how, and also maintains the observatory dial, the feature from which the name drew inspiration. This distinctive dial, characteristic of the most accurate clocks, does indeed display hours, minutes and seconds in separate sub-dials. Behind the name is a chronometer true to this legacy, and an achievement seldom equalled. The Observatory required no less than three years of design, research, development and execution, all for a unique timepiece: essential to the exceptional rarity of this mechanical achievement is the sophistication and precision of Thomas Mercer chronometry. The Observatory is a timepiece as highly finished as it is technically sophisticated; a statement of refinement, of taste and of respect for the revered art of marine timekeeping.

MASTERING THE FLOW
Three years in the making, the Observatory’s Calibre TM3001 is a uniquely sophisticated movement. As the legacy of Thomas Mercer’s marine chronometers dictates, it possesses several features that make it an extremely accurate timepiece. Its power source is a pair of two large, cylindrical barrels that convey their energy to the mechanism through a fusee-and-chain system. The mainspring barrels are connected to a fusee, a grooved cone with a curved profile. It acts as a gearbox, constantly changing gears in order to provide the movement with an almost constant level of torque. The amount of energy is such that they are connected by a solid, undeformable metallic chain, comprised of hundreds of components. The fusee-and-chain system provides the escapement with a steady stream of energy, thus stabilising the mechanism’s frequency. This isochronism lies at the very root of accuracy.

DEFINING INCREMENTS OF TIME
At the other end of the gear train, the very definition of time is carried out by one of the rarest escapements in clock- and watch-making, the detent escapement. Also known as “chronometer escapement”, it has proved the most accurate and reliable of all. Its unparalleled efficiency is the result of very low energy consumption, low friction and lightness. It is Thomas Mercer’s signature escapement and has been so for nearly a century. Regulating it is an art mastered by only a handful of experts, like Thomas Mercer’s. Last but not least, this rare detent escapement is enclosed in a tourbillon of the flying variety, which means its cage is held only by its bottom side. No upper-bridge spoils the view on its one-minute revolution. This self-rotating chronometric escapement coupled with the illustrious brand’s unique experience and know-how make the Observatory a supremely accurate timekeeper.

KEEPING A LONG VIEW
Calibre TM3001 is also a long-term movement. It features a perpetual calendar which displays the day, date, month, leap year and zodiac sign. These indications are supplemented with a truly rare 4-digit year indication. As all four digits are active, the Observatory looks to an endless future of performance and accuracy. It also indicates the equation of time, which represents the difference between solar time, which varies throughout the year as the earth comes more or less close to the sun, and our 24 hours per day time, based on the worldwide consensus that every day should have the same duration.

EMBRACING THE WORLD
Marine chronometers are meant to travel throughout the world: it is only logical that the Observatory Marine Chronometer be a world timer. More than that, it is a jumping hours world timer. The outer rim of the movement features a 24-world location, 24-time zone disc. At whatever given moment, in whatever place in the world, it tells the local time. More than that, it is a jumping hours world timer: in other words, every hour, the great disc aligns with the time by jumping in exact correspondence with the following window, in an extraordinary motion, overcoming a considerable technical challenge. This world-time indication works hand in hand with a day/night sub-dial, and a moon phase display. As the moon is the influence that drives the tides, it is also logical that the Observatory display it.

INNER BEAUTY
Underneath the Observatory’s numerous indications Calibre TM3001 is itself a work of art, featuring an impressive 1680 components, all finished according to the highest standards of watchmaking. Every single piece of brass or steel has been meticulously manufactured, plated and bevelled. Depending on their position and function within the mechanism, every wheel, gear, lever, spring or screw has either been finished with Geneva stripes, circular graining, straight graining or polished. Such a level of care is found in only extremely high-end executions of wristwatch movements, which are ten times smaller but considerably simpler. It is a truly inimitable horological achievement that this large and intricate mechanism be treated with such incredible, almost unparalleled, care.

POWER
A mechanical feat, the Observatory is also a performing timekeeper. Its twin barrels provide it with a 30-day power reserve that make winding it a pleasurable and rare occasion. Its hours, minutes and seconds hands each posses their own sub-dial for optimal legibility, which is the display hallmark of Observatory clocks. In the spirit of maximum accuracy, the one-minute flying detent tourbillon is coupled with a start/stop system. Hidden in a recess of the case, a lever commands the extension of a spring that reaches inside the movement. It halts and restarts the Calibre TM3001 on demand, allowing perfect synchronisation with official time.

FORM AND FUNCTION
Being a marine chronometer is not only about the movement. Such a timepiece is defined by the interaction between its mechanical heart and its casing. The first layer of skin that protects the TM3001 is its dial. Extensively grained and enriched with inlays of precious woods, it sports a set of large, hand-made blue-steel hands. The second layer surrounding the TM3001 is a set of glasses made of extra-white crystal. They seamlessly encase the mechanism while making it entirely visible under any angle, without distortion. The third layer is a set of gimbals, a trait that all Thomas Mercer marine chronometers share. They can either be blocked or freed in order to let the clock keep an even keel with the surface of the Earth, a condition of its accuracy. Once unlocked, they let the observer twist and take a peek at the movement, although its sheer weight makes it a delicate operation.

A REFINED STRUCTURE
The Observatory’s last layer of containment is a work of architecture. A steel base serves as foundation to a series of pillars that carry the clock itself. Both base and columns are made of steel inlayed with two rare species of exotic wood. One is Ziricote, a hard, South-American brown wood with deep veins. The other is Santos Rosewood, which presents a light brown hue and extremely elevated levels of hardness and density. These two timbers have been masterfully combined to render the same refinement and sophistication of the double colour mechanism.

ONE-OFF AND YET PROMISING
At the pinnacle of refinement and mechanical complexity, the Observatory is unique in many ways. Its complications, the level of time and care spent on rendering its movement as highly aesthetic as it is complex, and its fine aspect simply make it incomparable. All the time and effort put into devising and manufacturing this one piece represent the gateway to, and the promise of, new and highly exclusive timepieces. The Observatory is indeed a feat of horology and a laboratory, a full-scale field test of Thomas Mercer’s abilities. A test passed with flying colours.